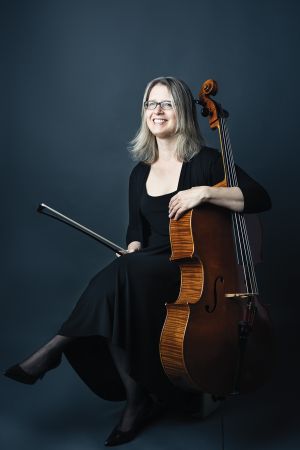 Winona Zelenka is one of Canada’s finest cellists on the scene today. As a soloist, she has performed concerti with the Toronto Symphony Orchestra, Mississauga Symphony Orchestra, and Toronto Philharmonia Orchestra, among many others. She is a dedicated recitalist and chamber musician as well as a proponent of new music, having performed several world premières of works written for her by Canadian composers. In 2006, she formed Trio Arkel with violinist Marie Berard and violist Teng Li, and since 2013 they have been presenting a chamber music series at Trinity St. Paul’s Centre in Toronto. In June 2010, Winona released her first CD set of the Bach Suites for Solo Cello on Marquis Classics. It has received international acclaim, and in 2011 was nominated for a JUNO Award in the category of Classical Album of the Year: Solo or Chamber Ensemble. Her second recording, Connections, released in 2012, is a collaboration with the celebrated pianist Connie Shih. Her films with Moving Head Productions include interviews for BOLD TV and a complete performance of Gaspar Cassadó’s Suite for Solo Cello, viewed by many thousands on YouTube. Winona obtained her Bachelor of Music and Artist Diploma at the University of Indiana, where she studied with Janos Starker. Her other formative teachers were William Findlay, Vladimir Orloff, and William Pleeth. Winona has won orchestral positions in England, Canada, and the United States. Her professional career has included two seasons of Acting Principal Cellist of the Santa Fe Opera Orchestra, and five seasons as Acting Principal Cellist of the Toronto Symphony Orchestra, of which she has been a member since 2001.