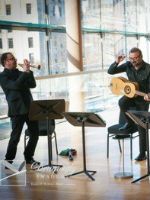 The Vesuvius Ensemble’s mission is to contribute to the preservation and transmission of the enormous cultural legacy made up by the popular cultural traditions in the zone around Naples and southern Italy. This legacy includes the cultural and musical traditions of countryside peasants, whose rituals and songs been passed on orally and in writing over centuries. Our performances attempt to paint a portrait of Naples and its surrounding countryside in the Renaissance & Baroque periods, giving colourful details of Neapolitan life (the Moorish and Spanish influence on the city’s cultural production, the city’s special religious and secular festivities, unique musical institutions like the Conservatorii, also hardships such as the plagues and the eruption of Mount Vesuvius in 1631). The rustic instruments used (the tammorra, chitarra battente, ciaramella, colascione, etc.) combine with Baroque continuo instruments (chitarrone, Baroque & Renaissance guitars, lutes) to create a unique accompaniment soundscape.