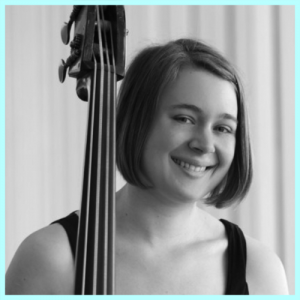 Pippa Macmillan was the first UK graduate from The Juilliard School's Historical Performance Masters course. She also has a Bachelors degree in baroque double bass from the Royal Academy of Music, where she studied with Chi-chi Nwanoku. She is now Professor of Baroque Double Bass at the Royal College of Music.Pippa performs regularly with the English Concert, including at Carnegie Hall and Wigmore Hall. She has played at Glyndebourne Festival Opera and the BBC Proms with the Orchestra of the Age of Enlightenment, and she performs with Orchestre Révolutionnaire et Romantique, English Baroque Soloists, Academy of Ancient Music, and Florilegium. She has recently appeared as guest principal with the Australian Brandenburg Orchestra and the Handel and Haydn Society, Boston. In 2015 she appeared in London's West End in the Globe Theatre's production of Farinelli and the King, and also in the play's Broadway transfer in 2017.Pippa is a fully qualified Suzuki cello teacher, as well as a trained Suzuki double bass teacher, and thoroughly enjoys teaching and watching students develop. Aware that both of these instruments are rather large, her daughter plays the violin!