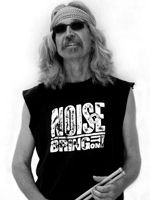 Musician Penner MacKay has been living and breathing drumming for more than forty years. His work has accompanied numerous television shows (“Off the Map”), major theatrical productions (Shaw Festival), and movie soundtracks (“The Snow Walker”). In the late 70’s he was part of the Juno Award Winning group “Myles and Lenny.” In the 80’s he toured North America with singer/songwriter Dan Hill. Most recently, ‘Accordion Crimes’, on which Penner played percussion, was listed as one of CBC musicologist Jurgen Gothe’s favourite CD’s of 2006. This versatile musician has conducted workshops for all age groups from troubled teens, to university students, to senior citizens. He’s also worked with corporations like Royal LePage, using drumming as an exercise in team building and co-operation. In 1992, with the help of artist/craftsman Rod Hillier, Penner created a set of thunderous tunable drums from wine barrels. Inspired by the Japanese Taiko drummers, and given that the two men live in the winery region of Niagara, these drums made perfect sense; they are completely unique, impressive works of art that make the ground tremble. And so was born ‘The Barrelhouse Drum Company.’ Having studied all styles of drumming, Penner has been passing his extensive knowledge along to students for 20 years. In 2006, he helped to launch “Drums Along the Niagara,’ Niagara-on-the-Lake’s annual drumming festival. In 2006, he received the town’s cultural award for volunteering. Personable, dynamic, and inspiring, when it comes to performance and percussion, Penner is one of Canada’s great communicators.