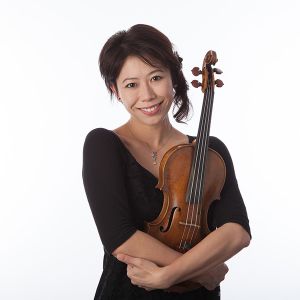 Natalie began her musical studies at the age of 3. She started playing violin at the age of 7. At the age of 16 she received the ARCT performance diploma at the Royal Conservatory of Music, and majored in violin performance at the University of Toronto. Her list of teachers includes Scott St. John, Annalee Patipatanakoon, and Katharine Rapoport. Natalie also has an extensive background in music theory and composition, having studied with Abigail Richardson and Alexander Rapoport. She is currently studying jazz with renowned Indonesian saxophonist Budi Winarto. She actively performs in orchestras, chamber music, musical theatres, jazz and pop concerts. She is currently a core member in the tutti first violin section of the Niagara Symphony Orchestra, and she is the principle second violinist and librarian of the newly formed Summerhill Orchestra. She has also been playing with Sudbury Symphony, Toronto Concert Orchestra, Kitchener-Waterloo Symphony, Opera York, National Academy Orchestra, Windsor Symphony, and many more. Natalie is very active in musical theatre and has played in shows on violin and other instruments for both classical and contemporary productions. She has also been active as violinist and vocalist in numerous bands in the past 15 years with a wide spectrum of genres including pop, folk, R&B, jazz, rock and metal, performed in numerous bars, weddings, corporate events and broadcasted television productions, and had appeared in soundtracks and albums. She is the violinist and lead female vocal in her primary Spanish fusion band, Urban-Gypsy Trio. She is a singer-songwriter, and also works and performs with fellow singer-songwriters and various groups on both acoustic and electric violin. In her spare time Natalie enjoys reading, writing, and playing more music.