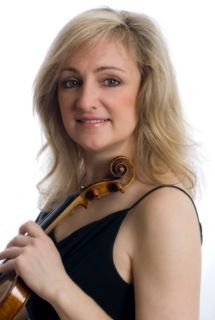 Best known as the concertmaster of the Canadian Opera Company Orchestra (COC), Marie Bérard is also a sought-after chamber musician, soloist, recording artist and teacher. She is a former member of the Toronto Symphony Orchestra and has performed with a variety of smaller ensembles such as Amici, Array Music and New Music Concerts and is also a member of Trio Arkel as well as the ARC Ensemble which has toured in Europe, China and the United States and was twice nominated for a Grammy Award for their Sony recordings. Highly regarded as an interpreter of contemporary music, Ms. Bérard has released a recording of a concerto by Henry Kucharzyk for violin and brass ensemble on the Opening Day label and can be heard on numerous CBC Records including the Meditation from Thais on with the COC orchestra. Ms. Bérard is a regular performer at numerous chamber music festivals, notably the Domaine Forget International Festival, the Ottawa International Chamber Music Festival, The Blair Atholl Festival in Scotland, and holds the position of Associate Concertmaster of the Mainly Mozart Festival in San Diego. Ms. Bérard joined the faculty of the Glenn Gould School in the fall of 2000 and plays a 1767 Pietro Landolfi violin.