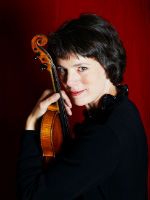 Julie Baumgartel has performed with Tafelmusik and the Freiburg Baroque Orchestra across Europe, North America and Asia. Now living in Kitchener-Waterloo, she frequently performs with the K-W Symphony and Nota Bene Baroque Players. She has been featured in numerous CBC radio broadcasts and performs chamber music regularly with the Gallery Players of Niagara, with the Factory Arts Quartet as the in-residence ensemble of InnerChamber in Stratford and at the Festival of the Sound in Parry Sound. From 2003-2012 she was conductor of the KWS Youth Sinfonia and has been an instructor at the Wilfrid Laurier University String Academy since 2011. She performs on a Paulo Antonio Testore violin made in Italy in 1740.