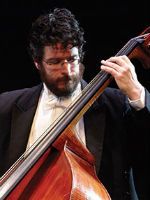 Joseph Phillips has been Principal Double Bassist with Orchestra London since 2007, a position he has also held with the Thunder Bay Symphony Orchestra and Sinfonia Toronto. Joe’s musical interests span a wide range of styles. He plays regularly with violinist Mayumi Seiler in her Via Salzburg Chamber Music series. This, and recent engagements such as concerts with the Art of Time Ensemble and the Sweet Water Music Festiva,l have given Joe the opportunity to play with some of the best chamber musicians in Canada. He performs with cabaret-pop songwriter Sarah Slean, cabaret singer Patricia O’Callaghan, folk-country songwriter Jenny Whiteley, Andrew Downing’s chamber-jazz group Arts & Letters and a really cool Balkan-gypsy-tango trio that still doesn’t have a name. As a double bassist and guitarist, Joe has contributed to many recordings, including Juno-nominated albums by the Pierre Schryer Band, Joey Wright and The Wailin’ Jennys. Joe has written symphony orchestra arrangements for a number of Canadian artists, including blues diva Rita Chiarelli, and songwriter Ian Tamblyn. A Toronto native, Joe studied double bass at the University of Toronto with the renowned virtuoso Joel Quarrington. When not playing or stuck on the 401 somewhere, Joe spends time at his home in London with his partner Sylvie, and enjoys playing with their children Eloïse and Rémi, as well as cooking and reading.