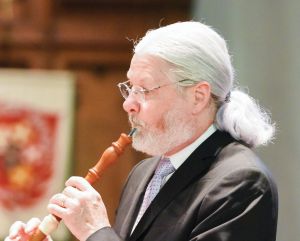 John Abberger, one of North America’s leading performers on historical oboes, is principal oboist with Tafelmusik. He has performed extensively in North America, Europe and the Far East, and appears regularly with other prominent period-instrument ensembles, including the Philharmonia Baroque Orchestra, the Washington Bach Consort, the Portland Baroque Orchestra, Ensemble Voltaire, the Handel and Haydn Society, and Boston Baroque. He is also the artistic director of the Toronto Bach Festival, an organization dedicated to exploring the music of J.S. Bach and its context with historically accurate performing forces. His recording of the Concerto for Oboe by Alessandro Marcello with Tafelmusik was glowingly reviewed by Gramophone Magazine as “one of the best there is” and “alone worth the price of the disc, even if you have other versions.” In addition to many recordings with Tafelmusik and other period instrument ensembles, he has directed, recorded, and produced two discs for the ANALEKTA label, both devoted to the instrumental music of J.S. Bach. Mr. Abberger serves on the faculty at the University of Toronto, the University of Western Ontario, and the Royal Conservatory in Toronto. A native of Orlando, Florida, he received his training at the Juilliard School, and Louisiana State University. In addition, he holds a Performers Certificate in Early Music from New York University.