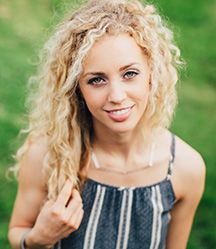 Born and raised in Niagara-on-the-Lake, Jena Slingerland began training in ballet at the Dingman- Nagy School of Ballet Arts at an early age. Participating in the dance program at Niagara District Secondary School, she discovered her love for other types of dance including jazz and modern. In 2007, Jena entered Ryerson University where she studied Performance Dance. It was there she trained with the esteemed faculty of Nadia Potts, Vicky St. Denys, Karen Duplesea, Kenny Pearl, Robert Glumbek and many other respected artists. She was also fortunate enough to work with Matjash Mrowzoweski and Kate Hilliard in new works premiering on the Ryerson stage. Upon graduating in 2011, Jena began working at the Greg Frewin Theatre as a Magician’s Assistant and dancer for over three years. Also in 2011, Jena joined the Niagara Dance Company’s mentorship program . Upon completion of the mentorship program in 2012, Jena joined the Niagara Dance Company as company member for the following two seasons. She performed in Mary-Jo Mullins original work, Vintages II: Moving as well as many other works. Jena is thrilled to be joining the Gallery Players of Niagara this season.