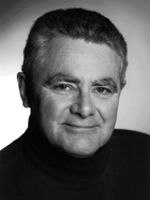 Guy’s first appearance on the professional stage was at the Crest Theatre in Toronto in 1958 when he played thirteen-year-old Howard in Inherit the Wind. Recently, Guy appeared as Hans Blix in the Mirvish presentation of Studio 180’s production of David Hare’s Stuff Happens. He also appeared in Factory Theatre’s production of Missing and at Rochester’s Geva Theatre Center in numerous roles including Dr. Gibbs in Our Town, Noel in the North American premiere of That Was Then by Irish writer Gerard Stembridge, Jack in The Weir, in Hibernatus Interruptus, a festival of new plays (2003) and as Christmas Present or Mr Fezziwig in five productions of A Christmas Carol. He has performed at most major theatres in Canada, as well as in the United States and England. Favourite productions include the Neil Munro directed Saint Joan (Theatre Calgary); Jacob Two-Two’s First Spy Case (Lorraine Kimsa Theatre for Young People); Between Pancho Villa and a Naked Woman and The House of Blue Leaves (Hamilton’s Theatre Aquarius); The Stillborn Lover (Theatre Passe Muraille) andThree in the Back Two in the Head (Tarragon Theatre and the National Arts Centre). Television series credits include Leo and Me with Michael J. Fox, Love and Hate: The Colin Thatcher Story, and Lt Murphy in the teenage detective series Daring and Grace on CBC/YTV. Guy is also heard as Mr. Bear in the animated series Rupert the Bear. Other television credits include Direction Canada (in German) for German television and Mountain Men for BBC-TV, which was also released as a feature film. His creative talents also extend into the fields of writing and directing. He has been active in new play development, as a guest director and artist-in-residence, and has written articles on contemporary theatre. After early university studies in modern languages, he received an MA (Drama) from Essex University (UK) in 1988. Guy permanently resides with his wife and two children in Niagara-on-the-Lake.