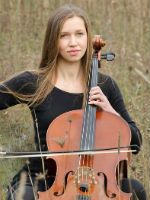 Grace Snippe is a student at Brock University entering her fourth year in the Bachelor of Music program at the Marilyn I. Walker School of Fine and Performing Arts. Grace has been studying the cello under Gordon Cleland for the past seven years during which she has also been a member of the Niagara Youth Orchestra. Grace was principal cellist at the NYO for the past two years and last April was a featured soloist in the NYO Chamber Concert. Grace performs regularly at weddings and other events in the Niagara region with the chamber group Grace Notes String Ensemble, as well with local artists such as Melissa Shriner and the indie alternative surf-rock band, The Bends.