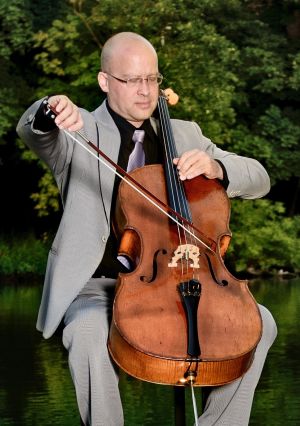 Principal cellist of the Niagara Symphony Orchestra, Gordon Cleland has performed across North America. He has appeared as soloist with the Niagara Symphony (Schumann Concerto in A minor and Vivaldi Double Concerto in G minor with cellist Gisela Depkat) and for the Debut Series in Montreal. He has extensive experience as a chamber musician, notably as a member of Trio Surgite with Erika Reiman on piano and fellow Niagara Symphony member Vera Alekseeva on violin. He is a regularly featured artist for the Encore! Series at Brock University. Gordon has broadcast frequently for CBC FM Radio and has performed on TV5, the international French television network. His strong interest in contemporary and Canadian music is reflected in the repertoire he performs. In addition to his activities as a performer Gordon has made a strong commitment to music education. He teaches cello at Brock University and is an instructor with Suzuki Niagara and the Niagara Youth Orchestra. He has been a featured performer for the Concertino Program of Jeunesses musicales, whose artists are carefully chosen for their pedagogical skills and their ability to communicate with young people. Gordon has adjudicated music festivals across Canada and runs a private studio in the Niagara region. Gordon started his musical training in London, Ontario and completed his studies with a Master of Music degree from Boston University. His principal teachers were George Neikrug, Walter Joachim and Gisela Depkat.