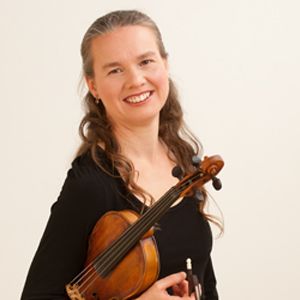 Geneviève Gilardeau has been a core member of Tafelmusik since 1999. She has been featured as a soloist several times with the group, in recordings of concertos by Vivaldi and Leclair, and in concert playing concertos by Bach and Telemann. She was introduced to baroque performance practice by the violinist and conductor Jean-François Rivest, at the Conservatoire de Musique du Québec à Chicoutimi and at the Université de Montréal, where she obtained her Master's degree. A core member of Les Violons du Roy from 1995 to 1998, she commuted during those years from Quebec City to Toronto in order to study baroque violin with Jeanne Lamon at the Glenn Gould School of the Royal Conservatory. Geneviève also performs with several groups in Toronto (Aradia, Toronto Consort, Classical Consort) and in Montreal (Masques, Les voix humaines). With her husband, lutenist Lucas Harris, she released the CD The Bach-Weiss Sonata. She is the proud mother of eight-year-old Daphnée Gilardeau Harris.