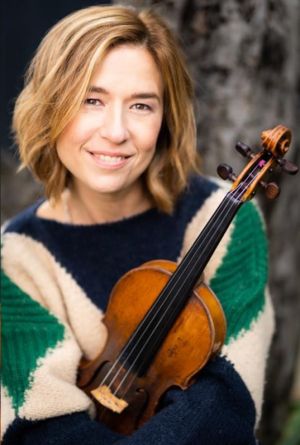 Known for her "lively temperament, energetic individuality and warm and communicative tone" (Muzsika, Budapest), violinist Erika Raum has a distinct musicality and tone. Playing professionally since the age of twelve, Ms. Raum quickly rose through the ranks by taking first place at the 1992 Joseph Szigeti International Violin Competition in Budapest as well as the award for best interpretation of a Mozart concerto. She has returned on many occasions to perform in Hungary, Portugal, Sweden, Austria, Germany, England, Italy and France. She has appeared as guest artist with orchestras including the Budapest Radio Orchestra, the Szombathely Symphony Orchestra, the Austro-Hungarian Orchestra, and the Franz Liszt Chamber Orchestra. At home, Ms. Raum performs throughout Canada, having appeared with orchestras in cities such as Toronto, Calgary, Vancouver, Ottawa, Victoria, Halifax, Laval and Edmonton. Both a recitalist and chamber musician, some of her international highlights include the Beethoven Festival in Warsaw, the BargeMusic Festival in New York, and the Seattle Chamber Music Festival and most recently, the Festival Pablo Casals de Prades, France and the Clandeboye Festival, Ireland. Past invitations include the Budapest Spring Festival, Szombathely Festival in Hungary, Carnegie Hall as well as the Caramoor and Prussia Cove festivals. Her performances are heard on an array of radio networks like CBC across Canada and the NPR in the USA. Ms. Raum has been a member of the ARC Ensemble since its conception. ARC is a chamber group specializing in the rediscovery of great 20th century composers and their music, with an emphasis on those whose lives were interrupted or even lost during the Holocaust. So far, they have released four CDs on the RCA Red Seal label, two of which were nominated for Grammy Awards. The Strad Magazine even gave her special mention for her performance noting that she had them “hanging on to her every note”. Her other recordings include a partnership with internationally renowned pianist Anton Kuerti for a world premiere recording of Carl Czerny's piano and violin works on the CBC Musica Viva label. She also recorded the Brahms Horn Trio and premiered Pantheon, a piece by esteemed composer (and mother), Elizabeth Raum, on the Arktos label. Ms. Raum is a graduate of the University of Toronto where she studied with the late Professor Lorand Fenyves and was awarded the prestigious Eaton Scholarship upon her graduation. She is currently on the faculties of The Glenn Gould School of The Royal Conservatory and the University of Toronto. She lives in Toronto with her husband, distinguished Canadian composer, Omar Daniel, their daughter Roslein, and triplets Eero, Oskar, and Roxanne.