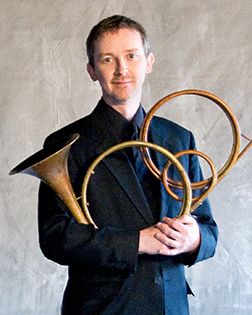 Horn player Derek Conrod is a member of the National Ballet Orchestra (Toronto), Music in Common and the Stratford Festival Orchestra, and teaches at the Eastman School of Music (Rochester) , Wilfrid Laurier University, and the University of Western Ontario . A frequent recitalist and lecturer on historical horns, Derek performed for thirty seasons as a member of Toronto's Tafelmusik, and appears on numerous recordings with Tafelmusik, Aradia, American Bach Soloists (San Francisco), and Apollo’s Fire (Cleveland). He appeared as a soloist with Tafelmusik at the Mostly Mozart Festival at New York’s Lincoln Center and at Orchestra Hall in Chicago. In 1995 he served as music consultant for the Stratford Festival’s acclaimed production of Amadeus.