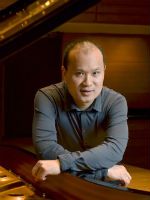 Hailed as "a pianistic sensation" (Rhein-Zeitung, Germany), David Louie ranks among the foremost Canadian musicians of his generation. A twice Grammy-nominated artist for his SONY BMG Masterworks recordings with the ARC ensemble, David Louie is a laureate of prestigious music competitions including the CBC Radio Competition, Santander International Competition and Sydney International Competition. David Louie made his New York debut under the auspices of the city's venerable Peoples' Symphony Concerts. He has appeared as soloist with numerous orchestras including the Vancouver Symphony, National Arts Centre Orchestra of Canada, Gulbenkian Chamber Orchestra of Lisbon, and Royal Philharmonic Orchestra of London. A respected chamber musician, David Louie has played with the Takacs Quartet, and is a founding member of ARC (Artists of the Royal Conservatory). Dedicated to rediscovering the work of unjustly neglected composers, the ARC Ensemble has received international critical acclaim for their groundbreaking albums On the Threshold of Hope (RCA Red Seal) and Right Through the Bone(RCA Red Seal). In recent tours with ARC, David Louie has performed at London, Rome, Budapest, Warsaw, Tel Aviv, New York, the Washington Kennedy Center, and the Amsterdam Concertgebouw. In addition to performances on modern piano, David Louie is an accomplished harpsichordist, and one of few keyboard artists to traverse traditional boundaries between period and modern performance. He has presented Bach's Goldberg Variations and The Well-Tempered Clavier in concert, and written transcriptions of works by Bach and Rameau. Born in British Columbia, Canada, David Louie began studying music at the age of five. At the Royal Conservatory in Toronto he worked with Boris Zarankin and Leon Fleisher, and as an Canada Council Arts Grant recipient he completed graduate studies with John Perry at the University of Southern California in Los Angeles. He currently resides in Toronto and is on faculty at the Glenn Gould School of the Royal Conservatory. A dedicated teacher of numerous successful and prize-winning students, David Louie has given masterclasses in the United Kingdom, Poland, Israel, and Australia.