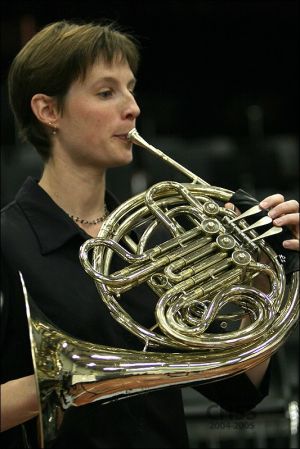 Christine Passmore (horn) performs regularly with the National Ballet of Canada Orchestra, the Canadian Opera Company, the Hamilton Philharmonic Orchestra, the Esprit Orchestra and the Hannaford Street Silver Band. She was featured in the 2009 production of Sondheim's Sunday in the Park with George (Shaw Festival, Niagara-on-the-Lake) and has played musicals, recitals, and chamber music at The Shaw ever since. Christine also performed in the Toronto productions of Les Miserables, The Lord of the Rings, The Phantom of the Opera, and The Sound of Music. On natural horn she has been heard with groups including Tafelmusik Baroque Orchestra, Opera Atelier, the Aradia Ensemble, L’Orchestra Classica di Santa Croce, Batignano, Tuscany, Italy, the Philadelphia Classical Orchestra, the Chicago Opera Theater, and the Smithsonian Chamber Players (Baltimore, MD). Christine holds degrees from the University of Western Ontario and Indiana University.