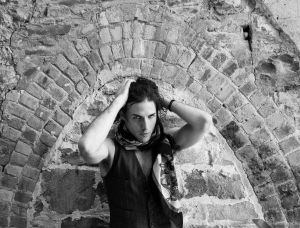 Brian Solomon is of Anishinaabe and Irish descent, born in the remote community of Shebahonaning / Killarney, located in the Manitoulin District of Northern Ontario, Canada. The bedrock in the area is among the oldest on earth. There are white mountains of quartz, silica and granite. There are clean bodies of fresh water the size of seas in every direction. Animals, Plants and Humans have thrived in the region since before the iceage, and Solomon’s ancestors have been on that land a very long time. This immense fortune he was born into informs his work greatly. These were his first teachers. Solomon followed first in the tradition of visual art in the region – the surrounding lands are one of the birthplaces of Eastern Woodland Art, and many contemporary artists are drawn here to practice. He began his Visual Art practice learning from some of these artists. While working as a portrait artist in his teenage years in Sudbury Ontario, Solomon discovered theatre, traditional and contemporary dance. He moved to Toronto to train at The School of Toronto Dance Theatre, and later received a Masters in Performance from the Laban Centre (UK). Solomon then performed in dance and theatre for dozens of creators from across Canada, the US and Europe, earning several Dora and Gemini award nominations. As a creator his work is multidisciplinary, raw, challenging and present. He has created a community work with over 40 interpreters, solos in trees, and animated installations of landfill. Solomon’s work has toured nationally and internationally. It has been presented at the Art Gallery of Ontario, the McMichael Canadian Art Collection, Toronto’s Harbourfront Centre and nGbK – neue Gesellschaft für bildende Kunst Berlin. A co-creation with German visual artist Judy Ross on their film "the Filmmaker", won best prize for experimental film at Watch Out! film festival in Macedonia. Solomon was also a recipient of a REVEAL Indigenous Arts Award from the Hnatyshyn Foundation. He has taught his practice in numerous shelters, friendship centres, dance and theatre companies and in universitie. Solomon is passionate about helping people relearn about their forgotten bodies, and take back the space those bodies occupy. Find out more at electricmoose.ca