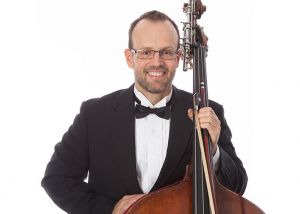 Brian Baty attended the University of Toronto where he studied the Double Bass with Joel Quarrington. He is currently principal double bassist of the Niagara Symphony Orchestra and also works as a freelance musician throughout Ontario where he regularly performs with orchestras in Windsor, London, Kitchener-Waterloo, Toronto, Hamilton and Kingston among others. Brian has also mentored and served as principal bassist for the National Academy Orchestra for the past two seasons. As a teacher, Brian has been a double bass Instructor at Lakehead University and the Kincardine Summer Music Festival and also maintains a private studio at his home in Kitchener, Ontario.