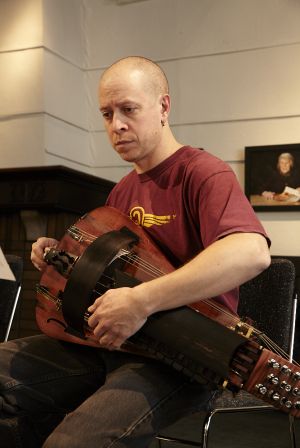 Ben Grossman is a busy musician: improviser, studio musician, composer, noise maker and audio provocateur. He works in many ﬁelds, having played on over 80 CDs, soundtracks for ﬁlm and television, sound design for theatre, installations, work designed for radio transmission, and live performances spanning early medieval music to experimental electronica. Ben's tools of choice are electronics, percussion, and, especially, the hurdy gurdy (vielle à roue), a contemporary electro-acoustic string instrument with roots in the European Middle Ages. He studied the instrument in Europe and has also studied Turkish music in Istanbul. With an abiding interest in pushing the limits of his instruments and pushing the boundaries of whatever venue or medium in which he works, Ben's solo CD Macrophone was released in 2007 and features a unique two disc form for simultaneous, aleatoric playback. www.macrophone.org