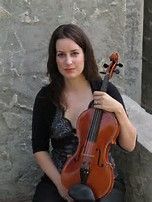 Violist Anna Redekop has studied with founding Juilliard String Quartet violinist Robert Koff in Boston, as well as at the Royal Conservatory of Music with Rennie Regehr and Steven Dann. She performs regularly as the founding violist of the Madawaska String Quartet and as the violist of the Shaw Festival’s Ensemble-in-Residence, the Blue Spruce Quartet. As founding violist of the Madawaska String Quartet, she’s performed at the Festival of the Sound, the Elora Festival, the Festival Iberoamericano in San Juan, Puerto Rico, in the Royal Conservatory’s Koerner Hall, as well as at many other international festivals and series, with collaborators such as Measha Brueggergosman, Jan Lisiecki, Adrianne Piezconka and Robert Kortgaard. In addition to her role as a chamber musician, she performs regularly with groups such as the National Ballet of Canada, Esprit Orchestra, Tapestry New Opera Company and the Queen of Puddings Music Theatre. CBC broadcasts include numerous chamber and orchestral performances throughout Canada. Anna has also performed and recorded with artists such as Jann Arden, Anne Murray, Bruce Cockburn, Sarah Slean, the Cowboy Junkies, Michael Buble and Tom Cochrane. She has performed at the Juno Awards and has recorded various film and television soundtracks. In addition, she’s served on faculty and coached chamber music at the Glenn Gould School of the Royal Conservatory of Music, the Kincardine Summer Music Festival and Music at Port Milford.