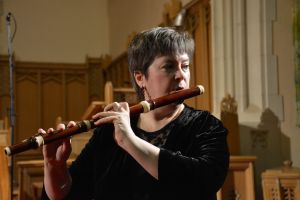 Alison Melville's career as a performer on recorders and historical flutes has taken her across North America and further afield, most recently to Switzerland and Finland. As a member of Toronto Consort and Ensemble Polaris and a guest with many other ensembles, she has played in venues ranging from Tokyo’s Bunkamura Hall and NYC’s Carnegie Hall to cinemas, convents, gardens, libraries, barns, ferries, school gymnasiums, and prisons. Her extensive international TV, film and radio credits include the soundtracks of The Tudors, CBC-TV’s beloved ‘The Friendly Giant,’ films by Atom Egoyan, Malcolm Sutherland and others, and broadcasts in the UK, Iceland, and New Zealand. Alison can be heard on over 60 CDs, including several critically acclaimed solo recordings. On the faculty of the Oberlin Conservatory (OH) from 1999-2010, she teaches at early music workshops across North America and at the University of Toronto. Wearing a different hat, Alison is also sometimes found making monotype and collagraph prints. www.alisonmelville.com