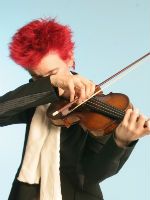 Aisslinn Nosky is a versatile and charismatic musician who brings passion and fervour to every project she pursues. She performs in solo and chamber music recitals across North America, Europe and Asia. Recent triumphs include performing concertos with the Calgary Philharmonic and with Tafelmusik Baroque Orchestra, as well as giving the world premiere of "Stand Still"- a new piece for solo violin by Michael Oesterle comissioned by Aisslinn with the support of the Canada Council for the Arts. Highlights of the 2011/2012 season find her performing Vivaldi's Four Seasons both in Boston with the Handel and Haydn Society and at the Lameque International Baroque Festival and guest directing the Thunder Bay Symphony. She is often in demand as a leader and concertmaster and has led the Grand River Baroque Festival Players, Arion Baroque Orchestra, and Collegium Musicum Hanyang. Aisslinn has recently been named concertmaster of the Handel and Haydn Society in Boston. Since 2005, Aisslinn has been a highly active member of Tafelmusik Baroque Orchestra.